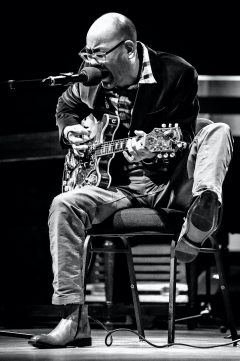 In this live Q&A, Adam Gussow and Ken “Sugar Brown” Kawashima, a Korean-Japanese American bluesman highlighted in Gussow’s book Whose Blues? Facing Up to Race and the Future of the Music, will be joined by Brian Foster, assistant professor of sociology and Southern Studies, for a conversation on Gussow’s book. A prerecorded talk between Gussow, Kawashima, and Foster will be available on the Center’s website at southernstudies.olemiss.edu by mid-October, and Foster will begin the live Q&A with prepared questions, then open it up to viewers. Email Afton Thomas or register below to receive the Zoom link.

Gussow’s book Whose Blues? Facing Up to Race and the Future of the Music challenges us to think freshly about the blues in a postmodern moment, more than a century removed from the music’s rural southern origins. If “blues is Black music,” as some contemporary claimants insist, what should we make of the International Blues Challenge held annually in Memphis, with its all-comers mix of nationalities and ethnicities? If there’s “no Black, no white, just the blues,” as another familiar meme would have us believe, why do some Black blues people hear that proclamation not as a call to transracial fellowship, but as an aggressive attempt at cultural appropriation and the erasure of traumatic racial histories sounded by the music? 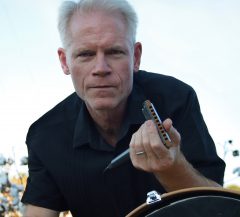 Adam Gussow is a professor of English and Southern Studies at the University of Mississippi and a professional blues harmonica player. He is the author of five books on the blues, including Mister Satan’s Apprentice and Beyond the Crossroads: The Devil and the Blues Tradition. Satan and Adam, a documentary about his decades-long partnership with guitarist Sterling “Mr. Satan” Magee, is currently screening on Netflix.

Ken Kawashima is a professor of modern Japanese history and Marxist theory in the Department of East Asian Studies at the University of Toronto. He is author of The Proletarian Gamble: Korean Workers in Interwar Japan, co-editor of Tosaka Jun: A Critical Reader, and the English translator of Uno Kozo’s Theory of Crisis. He is also a blues musician, singer, and composer known as Sugar Brown. He has released three albums of original blues music: Sugar Brown’s Sad Day, Poor Lazarus, and It’s a Blues World . . . Calling All Blues. 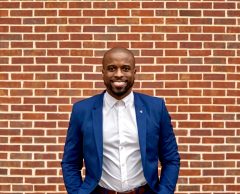 Brian Foster is an assistant professor of sociology and Southern Studies at the University of Mississippi. His work has appeared in the Washington Post, the Bitter Southerner, and Oxford Magazine. His first book, I Don’t Like the Blues: Race, Place, and the Backbeat of Black Life, which focuses on race and community life in the Mississippi Delta, will be out December 2020.