Lectures: Filmmaker Jacqueline Olive will discuss her film, Always in Season, its themes and representation in the industry, & take questions.

Jacqueline Olive presents “Always in Season” at 7 p.m. on Thursday, Nov. 12 as part of the Visiting Documentarians Series.

Here is the link to the free tickets for “Always in Season.” 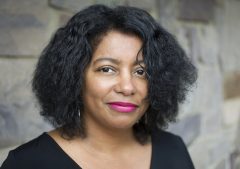 Olive is an independent filmmaker and immersive media producer with fifteen years of experience in journalism and film. Always in Season, her debut feature documentary, explores the lingering impact of more than a century of lynching and connects this form of racial terrorism with racial violence today. The film follows Claudia Lacy as she moves from paralyzing grief to leading the fight for justice for her son, Lennon Lacy, who was found hanging from a swing set in rural North Carolina in 2014. As the film unfolds, Lennon’s case—and the suspicions surrounding it—intersect with stories of other communities committed to breaking the silence of their own recent histories and leading the way to justice. Olive will discuss the film, its themes and representation in the industry as well as take questions from viewers.

This virtual event is cosponsored by the Oxford Film Festival.