The Original Peoples of the Southeast differed culturally, politically, and linguistically from other tribes across North America. The Cherokee, Chickasaw, Choctaw, Muscogee, and Seminole Nations were forcibly removed from their traditional homelands and relocated to Oklahoma. In her talk, Dwanna L. McKay will examine some of the unique cultural practices and diverse histories of Indigenous Nations originally of the southeastern woodlands from precontact to current day. 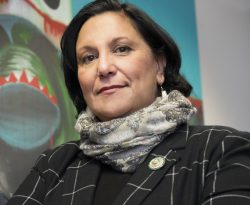 Dwanna L. McKay is a citizen of the Muscogee (Creek) Nation and an assistant professor in the race, ethnicity, and migration studies program at Colorado College. McKay holds a PhD in sociology, a graduate certificate in Indigenous studies, an MS in sociology, an MBA in management science, and a BA in political science. Raised culturally within the boundaries of her tribal nation in Oklahoma, McKay centers her teaching, research, service, and activism on an overall commitment to social justice. Her research focuses on social inequality and Indigenous identity, and has been published in numerous scholarly journals, including Sociological Compass, Sociology of Race and Ethnicity, American Indian Quarterly, American Indian Culture and Research Journal, and the European Sociological Review. She has also authored multiple book chapters, poems, essays, and opinion editorials. McKay currently serves on the national advisory committee for the Native American Student Advocacy Institute and previously held an appointment as Secretary of Education for the Muscogee (Creek) Nation.

SouthTalks is a series of events (including lectures, performances, film screenings, and panel discussions) that explores the interdisciplinary nature of Southern Studies. This series is free and open to the public, and typically takes place in the Tupelo Room of Barnard Observatory unless otherwise noted. However, as a result of the current health crisis, all events will be virtual, free, and accessible on the Center’s YouTube channel after each live event. Visit southernstudies.olemiss.edu for more information. Register at https://olemiss.zoom.us/webinar/register/WN_ZkT5UbceQSOWcDWlWzyAkg